skip to main | skip to sidebar

Oops! I Missed The Bend In The Road - Twice!

We've been hearing a lot about record breaking weather recently. The mainstream media is full of stories about the "Ridiculously Resilient Ridge" off the west coast being responsible for not only the lowest annual rainfall totals ever recorded in California, but also the new high temperature records that are being set almost daily recently. Then there was the dreaded "Polar Vortex" last month that was responsible for the lowest temperatures that the eastern United States had seen in fifty years (beware, it might return this week!). And even in the Williams Today Forum we are reading about such things as "Backside Slider Lows" producing record breaking east to west winds. All this talk about the weather reminds me of that famous quote:


"Everybody talks about the weather, but nobody does anything about it." - Mark Twain

Well, that's not true with glider pilots. They talk about it, and then they try to exploit it! For whatever reason, we seem to have been experiencing an increase in the number and frequency of fantastic wave days at Williams in the past few months.

The most recent fantastic wave day coincided with the Valley Soaring Association's Annual Holiday Dinner and first Winter Seminar on January 11, 2014. A few weeks before the big event, Peter Kelly and Kempton Izuno started discussing the weather for the day here on the Williams Today Forum. And as the day got closer and closer, it became apparent that it was going to be another extraordinary wave day.

I was scheduled to fly the ASW-24 (OJ) and I took off at about 13:00. The following map is from the RASP Blipmaps for Williams. It is a topographic map that shows the Mendocino Mountain Range in the vicinity of Williams (which is located at the small white #1). The map depicts the forecasted wave lift at 10,000' (700mb) at 13:00. There are two distinct red bands of very strong lift depicted on the map. I have put a straight blue line next to each area and labeled them 1 and 2. To give a perspective of the scale of the map, each blue line is about 35 miles long. That's nearly a 70 mile line of great lift! 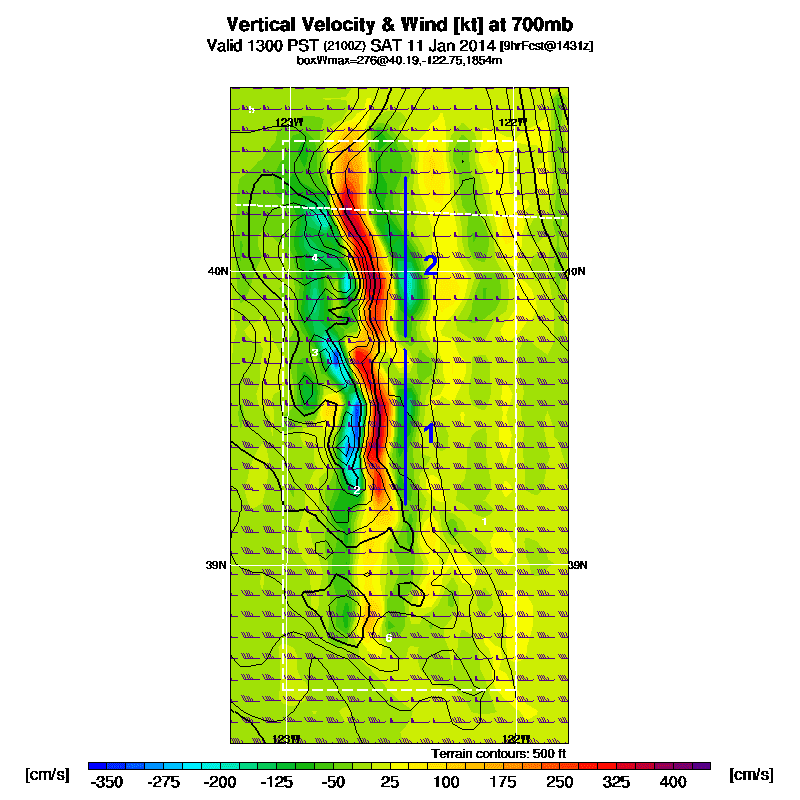 I intended to tow out to the southern band of lift (blue line #1) and run north and south in it and, like my flight on December 2, see how many "laps" I could do. This time the answer ended up being two!

Towing out to the area proved to be very slow going, as we were towing directly into a 50 mph wind for a good portion of the tow. It took about 35 minutes to get there. I had hoped to release in the primary wave, but we had not yet found the lift when the folks back on the ground were starting to inquire about the whereabouts of their tow plane! So I released at 10,200' and began searching for the lift upwind and to the north of the release point in the belief that we had not yet traveled far enough west. I found it after about five minutes of searching at and it was strong. I encountered it at 9,200' and it was briefly 10 knots (1,000 fpm) up!

Here it was a solid 6 knots as I began climbing and working to the north. 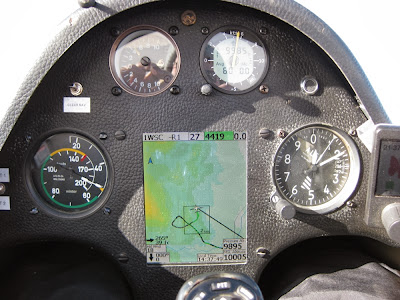 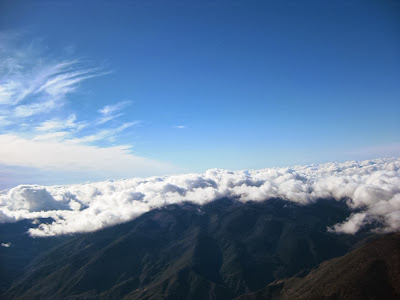 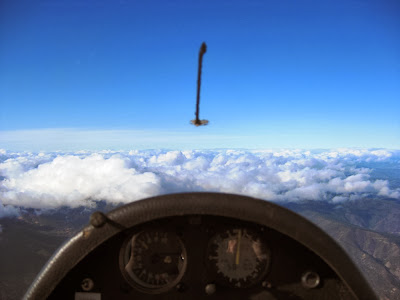 And this is looking out the right side of the glider. There would be no nice lenticular clouds to mark the upwind edge of the lift on this day. And the lower level scud clouds in the rotor areas were not even formed into nice wave bars. (Looking downwind) 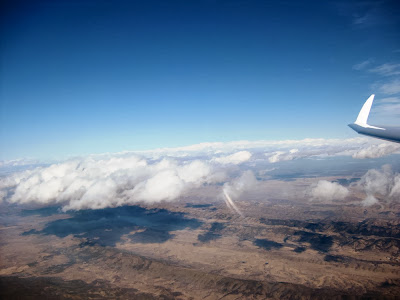 I continued north until the lift just started to drop off. I decided to stop and retrace my path through the area of solid lift in order to gas up before exploring farther north. 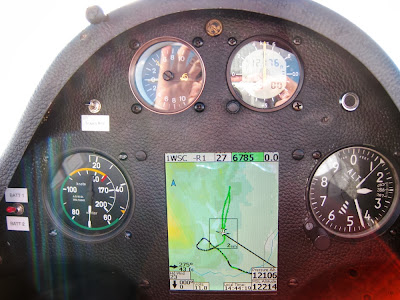 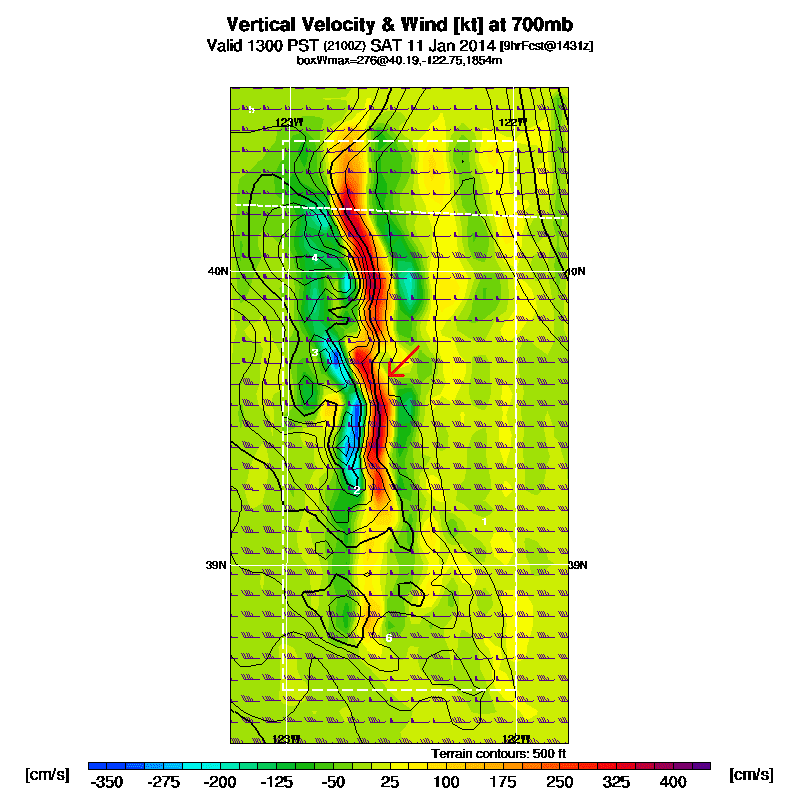 The hard part is finding where that bend in the lift is while you're flying and you are not intimately familiar with the landscape in relation to the ClearNav map. So I took at stab at where I though it should be and started to alter my course to the left.

You can see in this photo that I was leaving the lift (green trace) and entering sink (black trace). 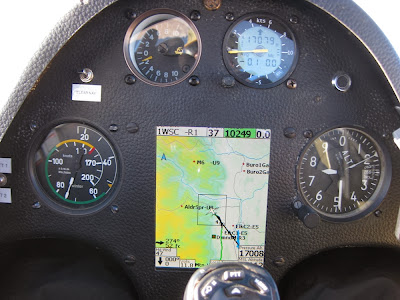 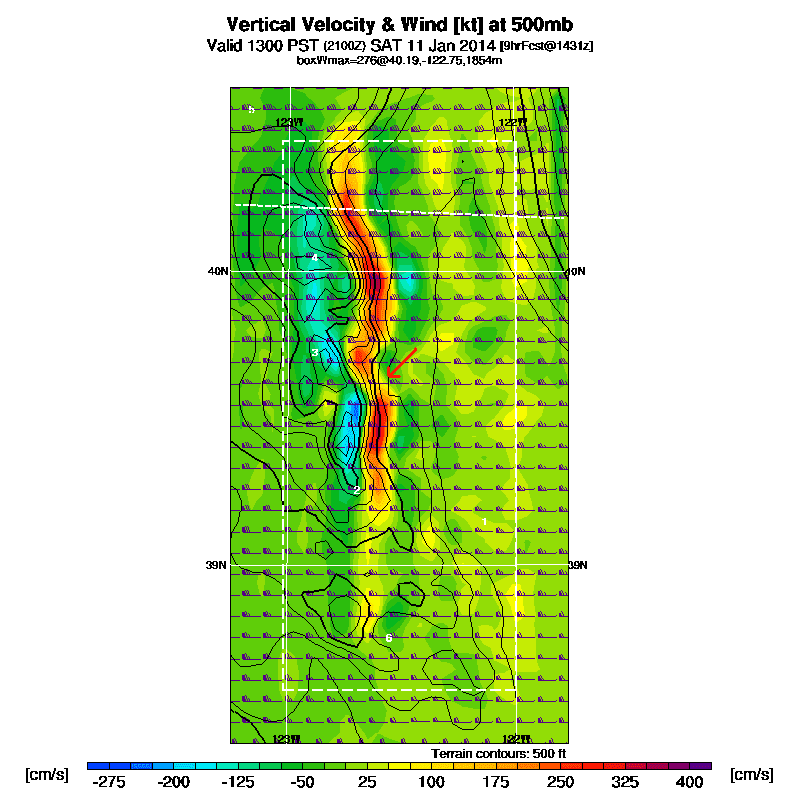 Regardless, the views at 17,000' are always awesome! So I took a few photos before turning around to head south.

This is looking out the left side of the glider. (Wind is R to L) 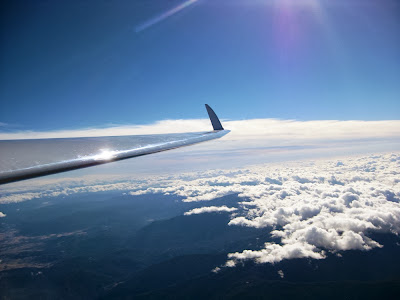 And this is looking out the right side of the glider. (Wind is R to L) 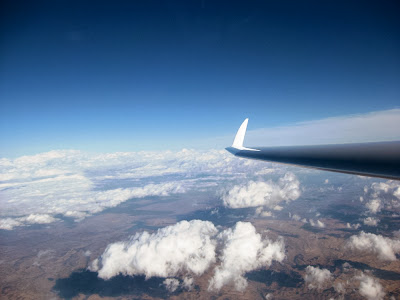 I made my turn near Alder Springs and then began my first run to the south. My intent was to stay in the lift until it started to drop off and then return north. Based on the maps above, I expected this to occur in the vicinity of Goat Mountain's latitude.

I took these photos just after beginning the southbound run. (Wind is R to L) 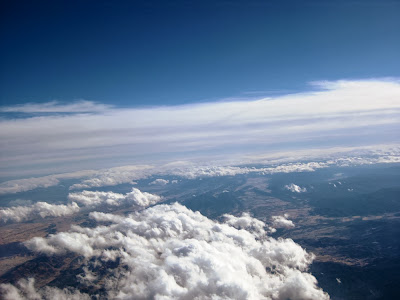 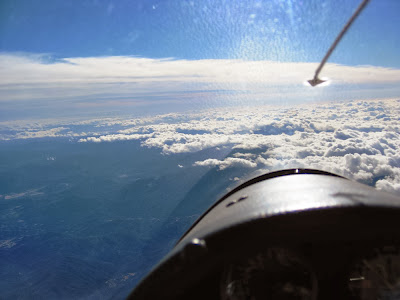 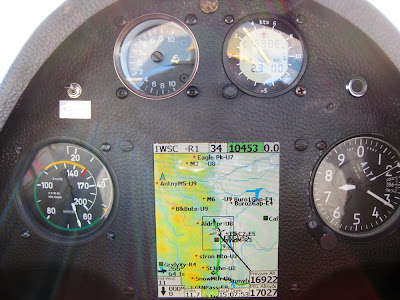 As I made my way to the south, I tried very hard to maintain a proper airspeed and crab angle to stay in my desired cruising altitude band of 17,000' to 17,500' while also maintaining my desired flight track. This was something that I had learned from my flights with Kempton. I succeeded, but not nearly as smoothly as Kempton had demonstrated. I still need more practice with that.

I went a little farther south than Goat Mountain and then turned to return to the north. The going was pretty smooth as I just had to retrace my southbound track, and again be mindful to adjust my speed and crab angle accordingly.

But then I made a huge mistake! When I got back to same northernmost area that I had been at before, I once again started to experience sink. I was thinking that maybe I was too far upwind. So even though I am well aware that you should normally make your beat reversing turns into the wind while wave flying, I decided to make a quick turn downwind to simultaneously move a little downwind and reverse my direction of travel. Well, the 6 knots of sink I was in rapidly became 10 knots! I increased my bank angle from 45 to 60 degrees and sped up. The sink kept getting worse and maxed out at 22 knots down! (I was not aware how bad it actually was during the flight. I only learned this from post-flight analysis on SeeYou.) In the approximately 3 minutes it took me to make the turn and get back into the lift I lost 2,500'!

Sometimes the signposts in soaring are subtle. Other times they will whack you over the head if you just look outside the cockpit for them! As I was breathing a sigh of relief after leaving the area of enormous sink and was again flying to the south in the lift, I looked out to the west and noticed an area of clear air over the valley between Black Butte and M6. I thought to myself "I bet that's a Foehn Gap at the bend in the road." My first thought was that I'd fly up there on my next northbound leg. But then I thought "Wait a minute! Nothing says I have to go all the way south and back north before attempting to go up there! I'll just hang a right turn now."

This is looking out the right side of the glider at the Foehn Gap at the "bend in the road". M6 is under the clouds at about the center of the photo. (Wind is L to R) 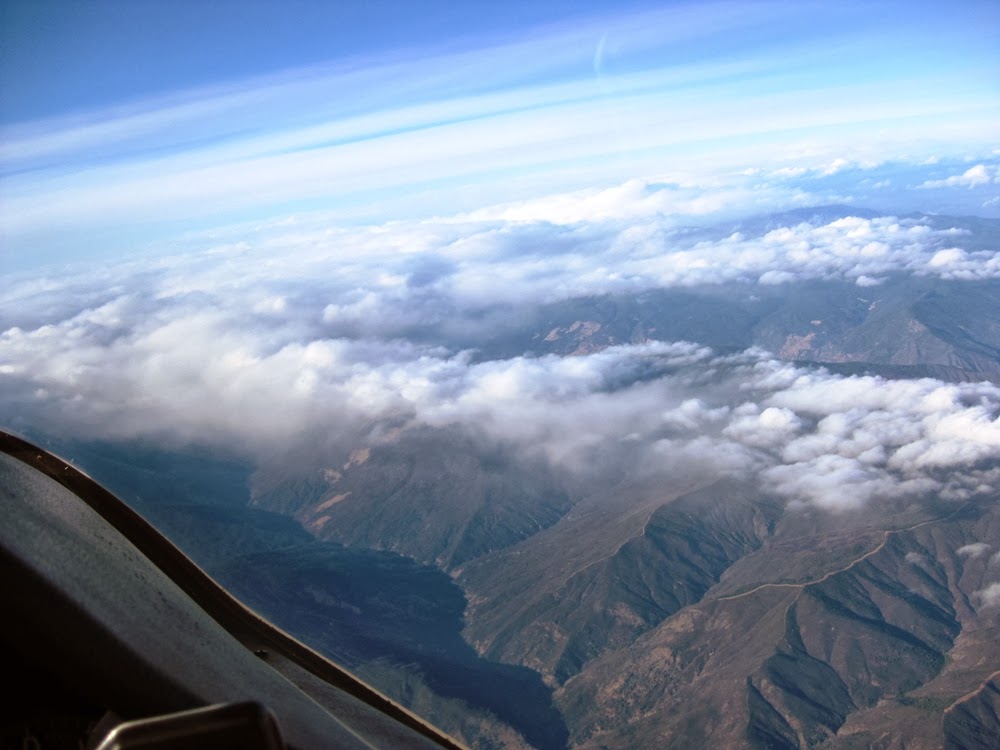 Looking out the left side of the glider at the upwind edge of the "bend in the road" Foehn Gap. (Wind is L to R) 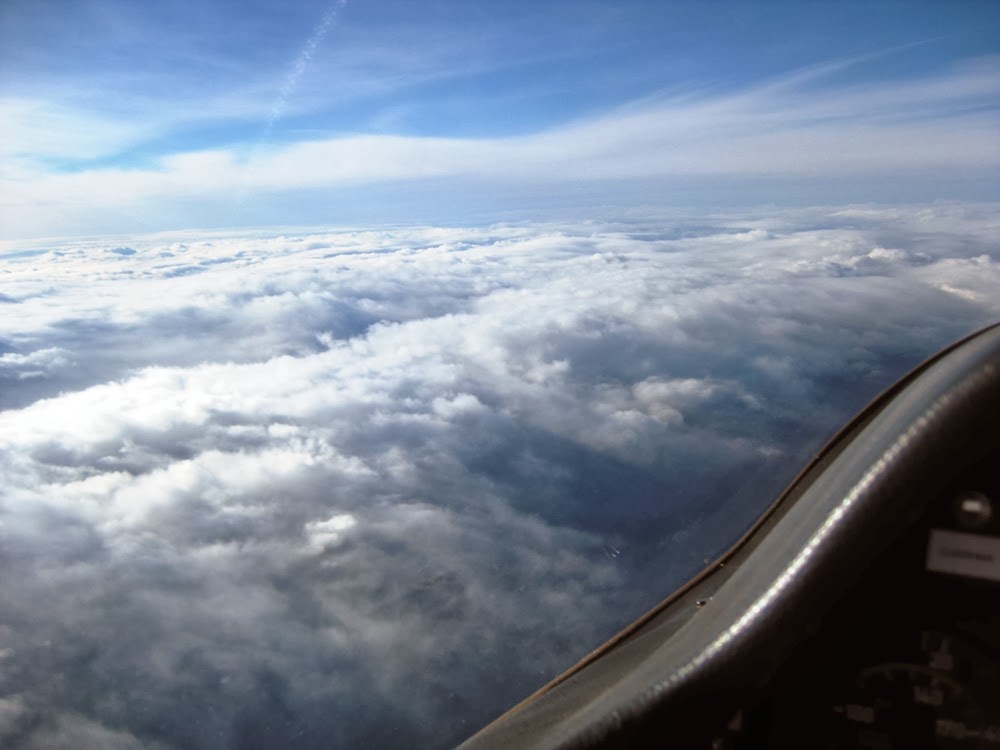 I had finally found the bend in the road!

In this photo you can see an aircraft depicted on the ClearNav display to the north of me. It had been detected by the Flarm (a collision avoidance device) and the information was transferred to the ClearNav display. It was a 747 passing at 28,000' and moving very fast! 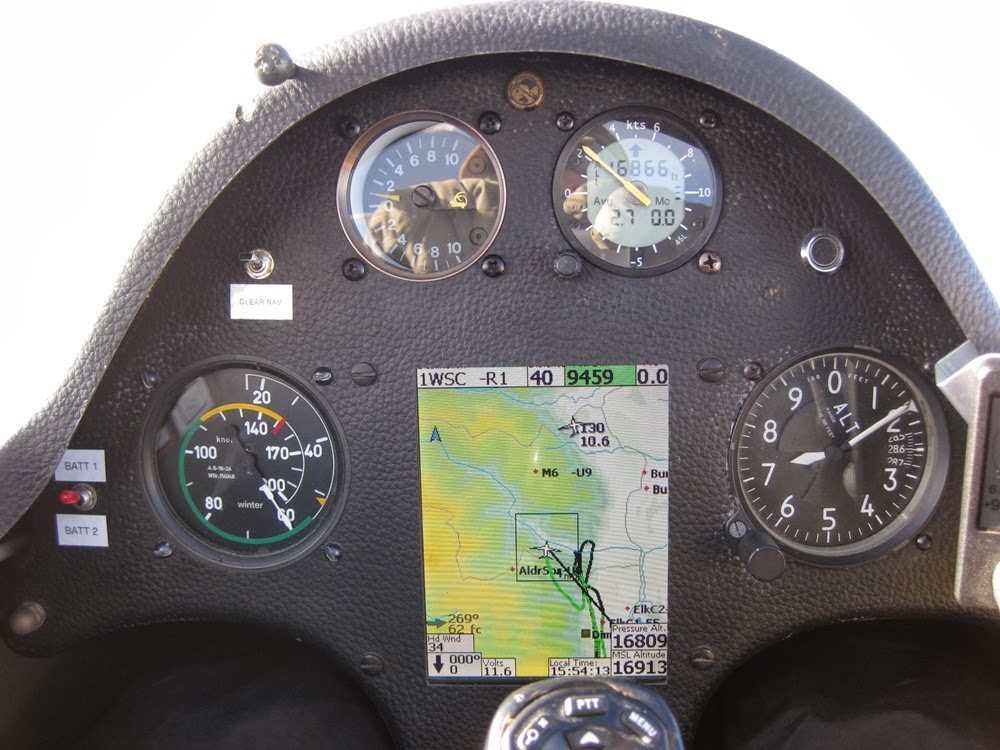 Here I had progressed almost the farthest I went before turning to head southbound again. 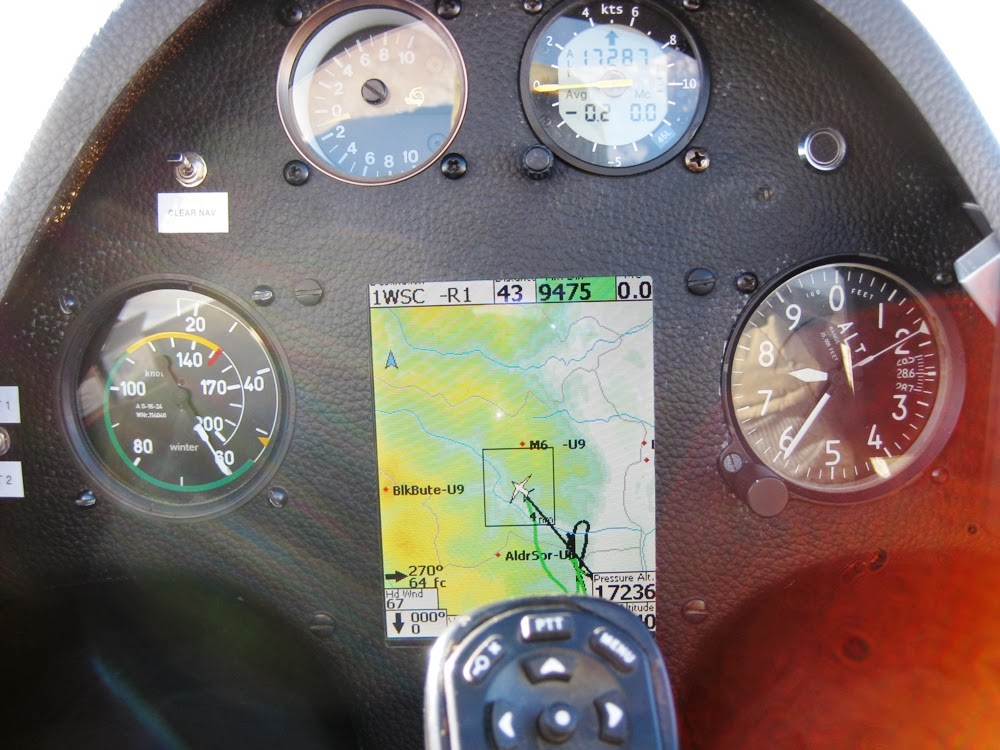 By the time I returned as far south as Goat Mountain, I had been continuously above 16,000' for about an hour and a half (if you don't count those few minutes of shear horror!). I was freezing cold and decided not to go back north. Instead, I decided to just continue to the south for awhile and see how far I could go before returning to Williams while keeping an extra safe margin of altitude in reserve. I wanted no more unpleasant surprises on this flight!

This is looking northwest at Clear Lake as I headed south in the vicinity of Gold Mines. 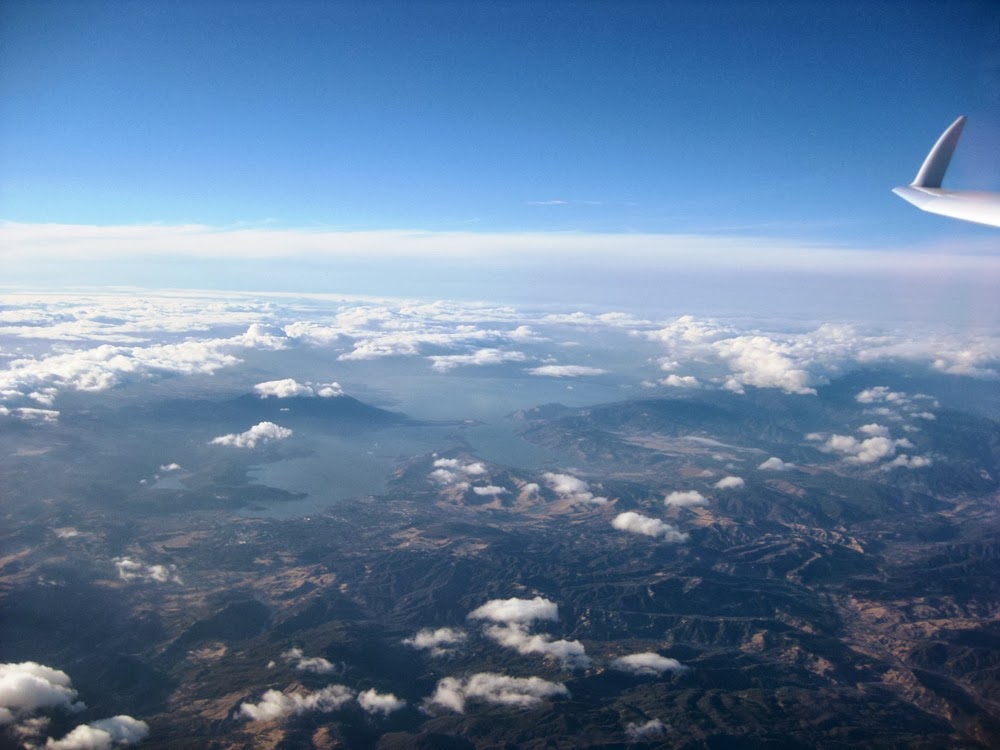 And this is looking south at Lake Berryessa in the distance from the same point. 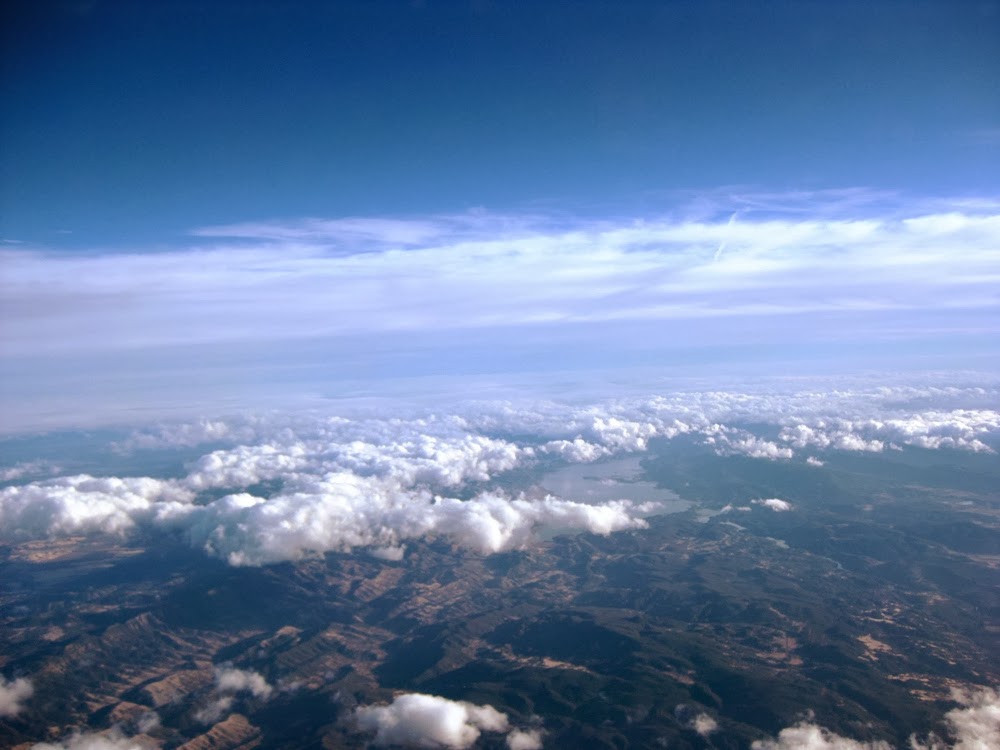 This shot is looking east at the Capay Valley from Berryessa Towers. You can see by the shadows on the ground that it was getting late in the afternoon. 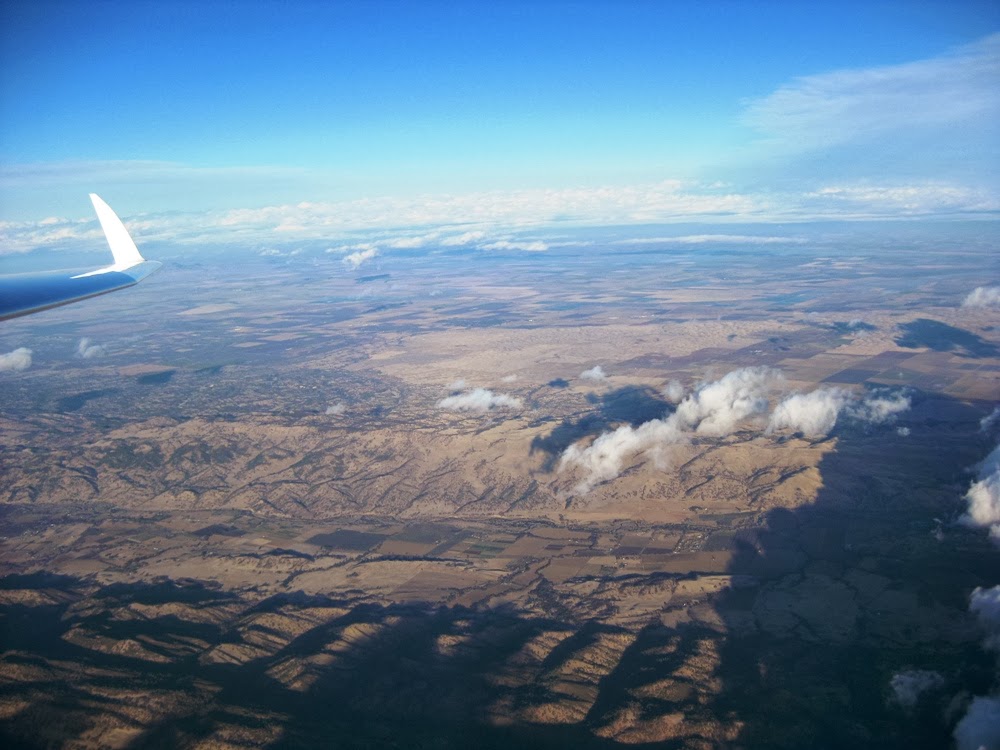 And  lastly, here is Lake Berryessa just before I turned to return to Williams. 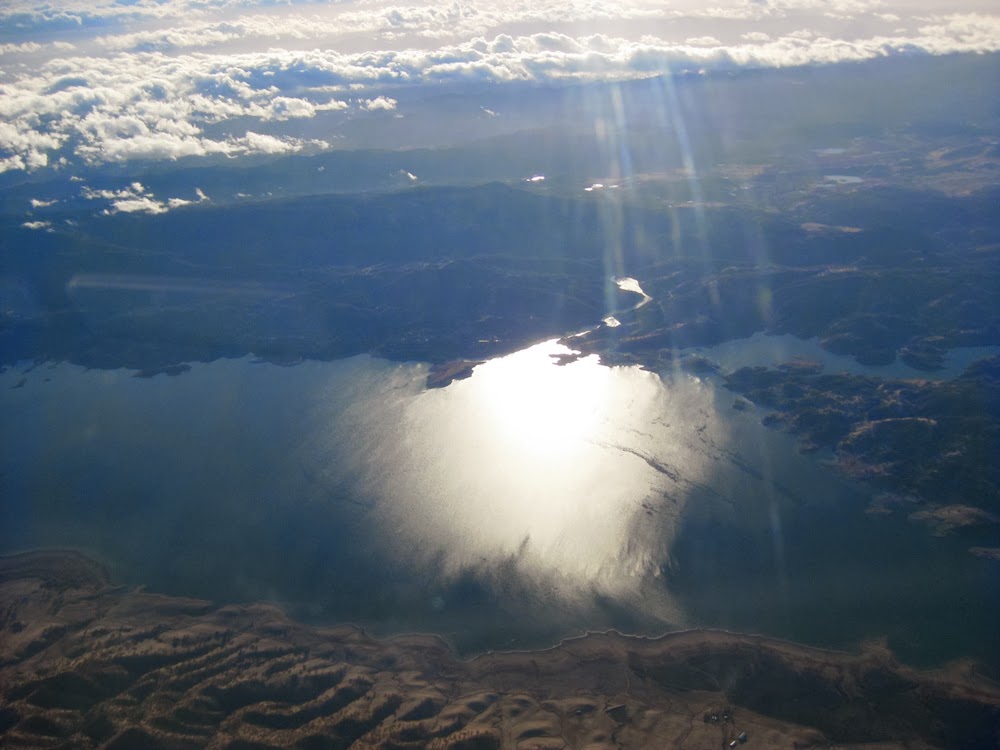 I returned to Williams and was eager to get the glider secured and get into the hangar for the nice ham and turkey meal that awaited! As I was walking in, I looked to the east towards the Sutter Buttes and noticed how beautiful the sky was as the sun was setting. 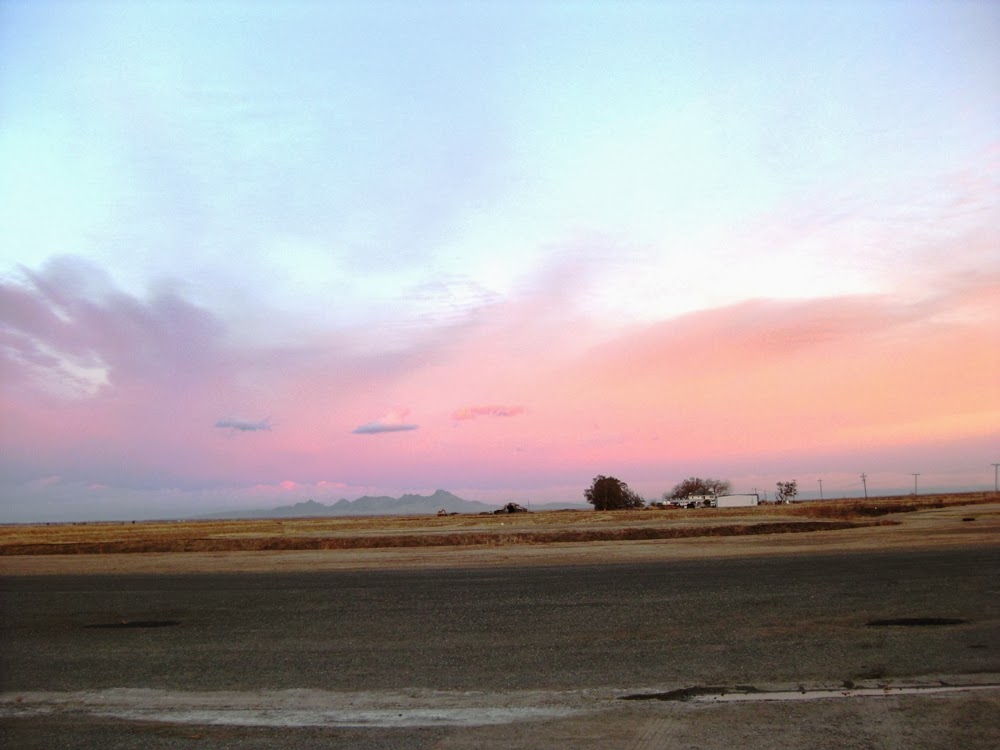 Here is my flight trace in SeeYou. 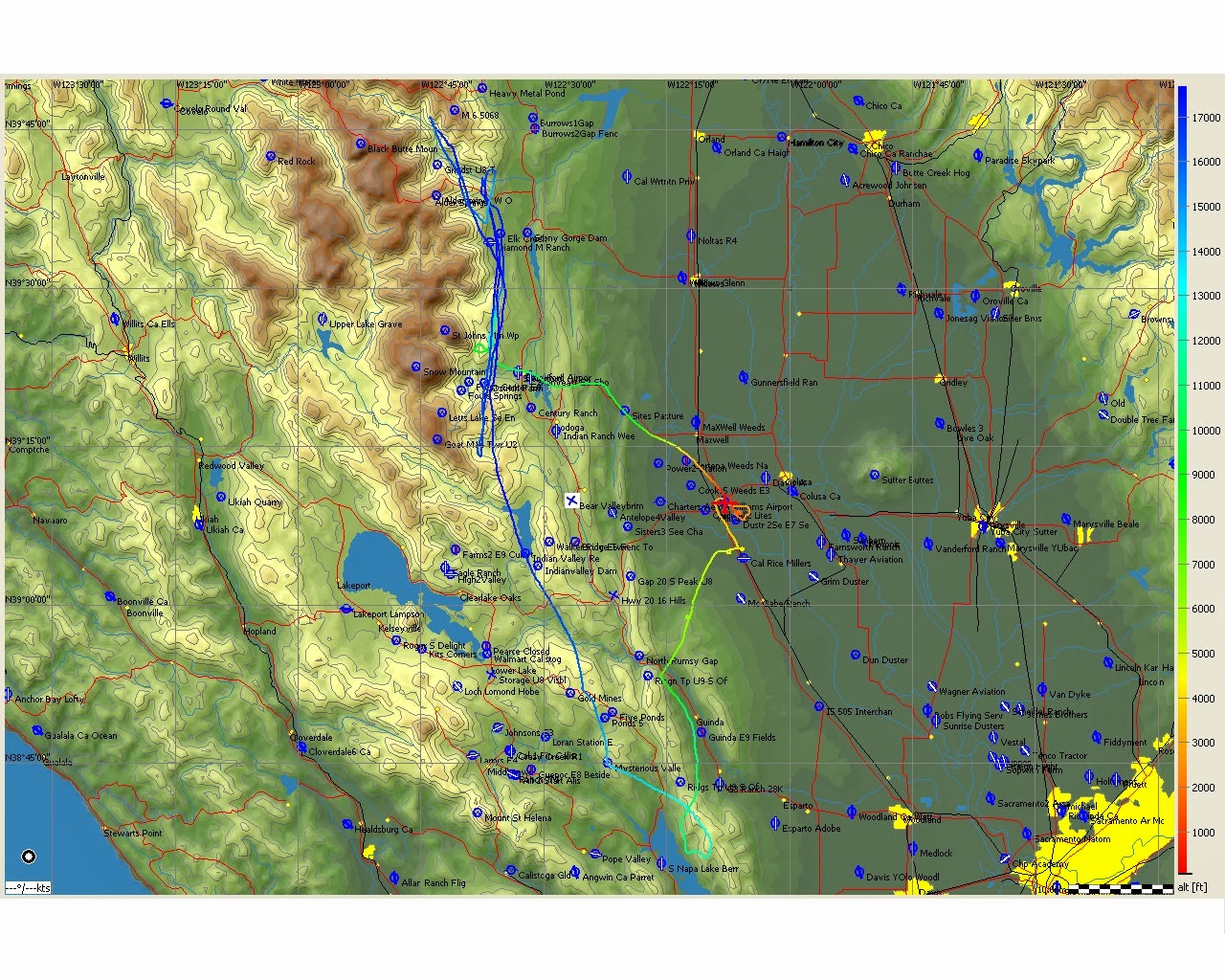 Update
As the regular readers of the Williams Today Forum are aware, Jim Darke has been doing some pretty fancy things with maps recently. Jim was a professional cartographer in a former life and has been tinkering with overlaying the RASP Blipmaps onto topographic maps that depict the Williams turnpoints. I asked Jim if he would work his map magic and add my flight trace to the 10,000' and 18,000' 13:00 forecasts overlaid onto the map of Williams turnpoints. Here are the results. 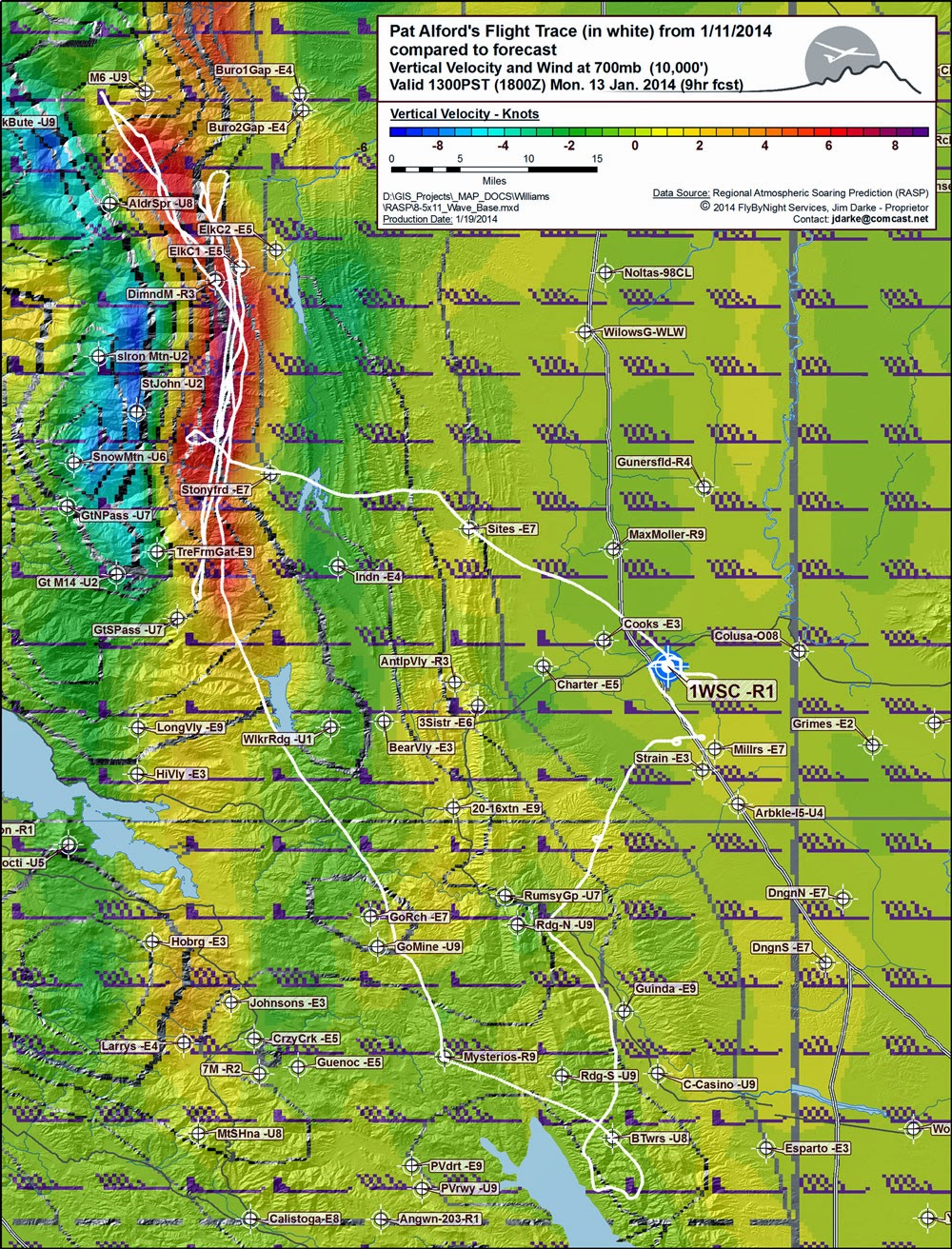 You can see that indeed I was close to the "bend in the road" on my first turn from the north to the south and way out of the lift on my second turn to the south. Thanks Jim, I really appreciate your efforts!

If you like this blog, check out my blog of flights from Minden, NV at: